Sojourn to the Past: Reflections from an Eighth Grader

As part of their study of U.S. History and as a culminating trip for the year, our Eighth Graders embarked on a trip to the South 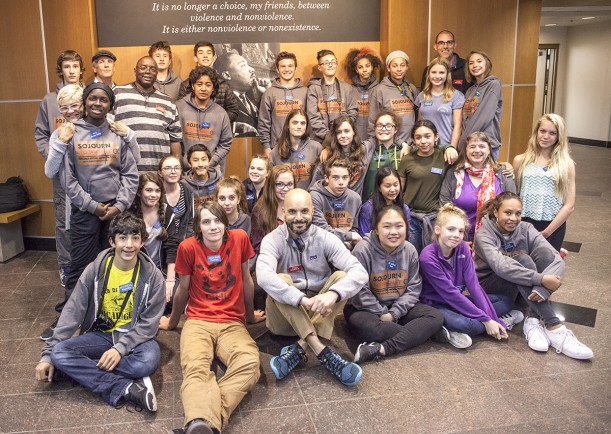 Led by a group called Sojourn to the Past, students visited some of the most historically significant civil rights sites, monuments and museums. Read the reflection on the trip from Eighth Grade student Eva Whitney.

“Recently, my class took a trip to Georgia and Alabama with a program called Sojourn to the Past. During the trip, we visited memorials and museums and met key figures of the Civil Rights Movement. The speaker that stood out to me the most was Minnijean Brown-Trickey. Minnijean Brown was part of the Little Rock Nine, a group of nine African American students who led the desegregation of schools effort by enrolling in Little Rock Central High School (an all white high school) in 1957.

When Minnijean first entered the small conference room where we were all seated, she appeared to be an average person. With a large smile on her face and slightly graying hair, she looked like any person you would pass on the street, but as soon as she started talking, I could tell she was certainly not average.

Meeting Minnijean was a truly amazing experience. What was most impressive about her was how forgiving she was. Minnijean was provoked every day by children her age, but she always kept her ground. She was hilarious and was able to make light about some of her time at Central High School, while still educating us. I was also amazed that she was willing to talk about Little Rock Nine to schoolchildren so frequently – she travels around the country yearly leading workshops and engaging with kids. She respected our opinions and let us ask her whatever we wanted, encouraging us to enhance our knowledge of the Civil Rights Movement. My favorite quote from her was, “They [white students who bullied her] threw away their dignity and it landed on us.” Minnijean had the clarity to see that her peers who were disrespectful towards her had no dignity. She didn’t let her skin color change how people treated her and stood up to those who disrespected her. Meeting Minninjean Brown-Trickey was one of the most amazing experiences of my life because I realized that she was only a few years older than me when she stood up for her freedom, and she was a leader in a movement that changed our country. I started to ask myself, “what positive change will I make?”

Going to places and meeting people who I had only heard about in history books left a deep impression on me and made the movement so much more real than before. This trip opened my eyes to how such key parts of American history are missing from mainstream narratives. People who have helped this generation and future generations never appeared in history books. Children today aren’t learning about the other heroes of the Civil Rights Movement. This trip opened my eyes up to how deep the roots of racism are in this country and made me more sensitive to issues involving race today.”