Before spring break, the 8th Grade had the privilege of traveling to Alabama on a civil rights tour with Freedom Lifted, a wonderful organization led by founder and principal Mia Henry that creates historical and cultural experiences, as well as social justice trainings for young adults.

We started at the beginning - Bethel Baptist Church in Birmingham, where the first organized movement against multiple types of segregation was born. We learned about one of “The Big Three” - Reverend Fred Shuttlesworth, who led the church in the 1950s and ’60s (the other “Big Two” being Ralph Abernathy and Rev. Dr. Martin Luther King, Jr.). 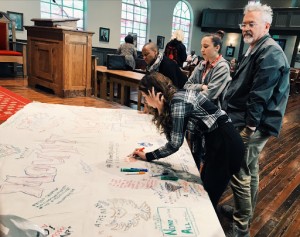 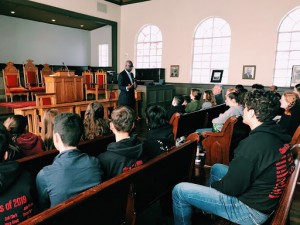 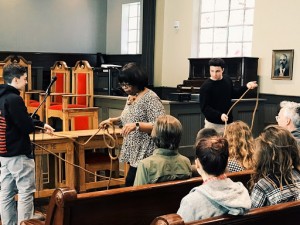 Next, we spent time at the famous 16th Street Baptist Church learning about what became the epicenter of the Civil Rights Movement in Alabama, and how terrorist actions by white racists led to bombings across Birmingham in the early 1960s that galvanized the black community and eventually the allies across the nation and world. 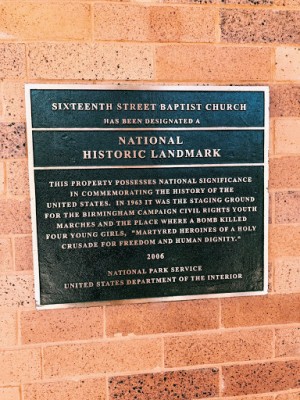 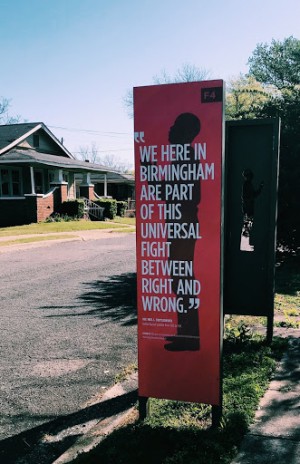 We had time with Catherine Burks-Brooks, Freedom Rider, SNCC (Student Nonviolent Coordinating Committee) member, and inspirational speaker. She reflected, “When the movement came along, I was ready.” She described the discrimination she faced, from sidewalk segregation and being “bumped” or riding the bus downtown: ”I never stepped aside.” She described, “I kicked my way into the movement…” because she wasn’t invited to trainings, but she made her way in. When she faced Bull Connor after being arrested with John Lewis and Lucretia Collins, Connor came to get them at 1:00 am out of jail to drive them out of Alabama, then instead dropped them in a small “sundown” town…and she told Bull Connor, as he kicked them out of the car and threw out their luggage, “We’ll be back by high noon.” They sought out safety immediately because they knew the Klan was coming for them. She inspired us through her courage and determination. 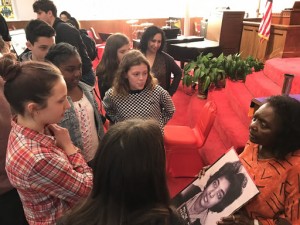 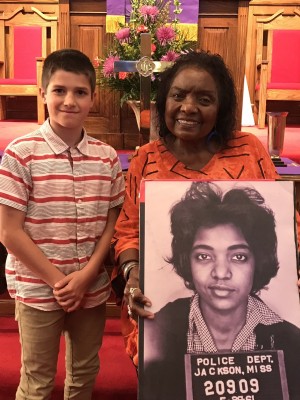 Finally, we ended our first day with a guided tour of Kelly Ingram Park, the gathering place for the Children’s Marches of 1963, which marks the special role youth played in the fight for civil rights in Birmingham. We learned about the horrors of Bull Connor’s leadership, and saw the statues honoring the black youth who bravely faced that violence with remarkable determination. We also learned about Miracle Sunday, the persistent marchers and the ally-ship of the fire captain who gave the order to the fire fighters to refuse Connor’s orders to use their fire hoses on the youth protesters. 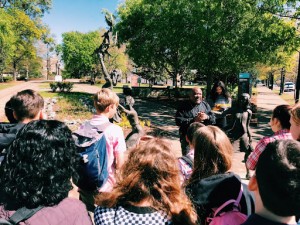 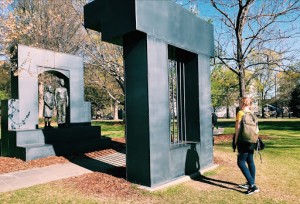 The next day, as we moved towards Selma, we stopped at the Lowndes Interpretive Center, dedicated to the people who marched from Selma to Montgomery. We learned why the black panther, a native animal of the the county, became the symbol for the Lowndes County Freedom Organization (just as the the donkey is the symbol for the Democratic Party and the elephant is the symbol for the Republican Party). We learned how people sacrificed their homes for the right to vote - that when white landowners learned their black tenants were trying to register to vote, when in Lowndes there were no black registered voters, the landowners evicted them, forcing families to live in tent cities on black-owned farms through the blistering summer and cold winter. We were humbled by what people were willing to sacrifice for the right to vote. 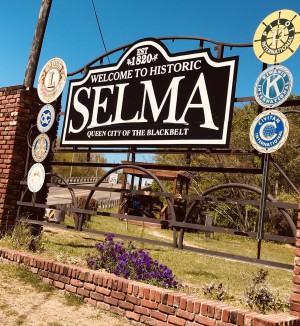 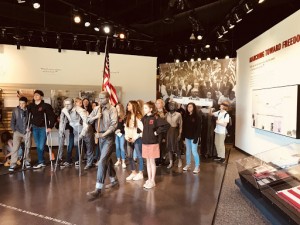 We then continued on to Selma and met Joanne Bland, who at the age of 11, got ready to march with more than 600 people across the Edmund Pettus Bridge to call for voting rights in Alabama. She spoke to us as we stood on the steps of Brown Chapel A.M.E. Church, the church of her youth and the launching point of the historic Selma marches. She told us that as a child she liked marching, and on that day, March 7, 1965, she thought it was like any other march, not knowing what violence lay ahead. How could she know that this day would come to be known as Bloody Sunday? She wanted us to know that the violence didn’t end on the bridge, that officers chased the peaceful marchers from the bridge all the way back to their neighborhood, just over half a mile away. She also wanted us to remember the victory they achieved on their third attempt to march to Montgomery.  She didn’t want us to remember only the violence - we needed to know that the people bravely persevered and made the five-day journey to Alabama’s capitol, where Dr. King gave his “How long? Not long” speech. 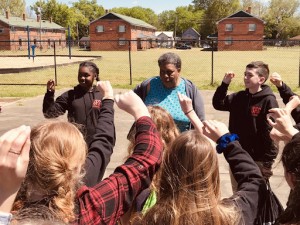 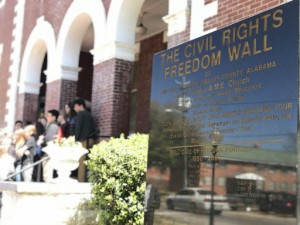 She connected her experience to today, that the Black Lives Matter movement is in direct line to the history we were there to study, and called on us to join her in the ongoing work to fight racism and other human rights issues.

The next day brought us to Montgomery, and to visit the Equal Justice Initiative (EJI) National Memorial for Peace and Justice. 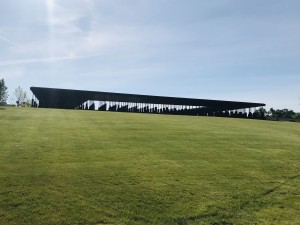 EJI believes that, as a nation, we cannot fully reconcile the injustices of the past until we feel the truth of that past and face it. Just ask our 8th Graders what it was like to face the steel pillars for each county, largely from across southern states, that had the names and dates of people lynched/murdered in a time of rampant terrorism due to sustaining slavery as the foundation of the economic structure of the U.S. through the Jim Crow era, enforced by white racists to maintain a system of oppression for people of color and their allies. 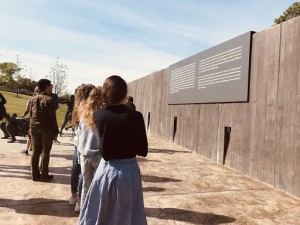 Name after name after name - 4,400 total, only a fraction of the real number - given that the memorial only represents those deaths they could document from 1870 to 1950. As we made our way into the memorial, the ground started to slope down and the pillars began to rise, and soon, like angels rising or strange fruit hanging or a looming nightmare…we were below the pillars squinting to read the names. 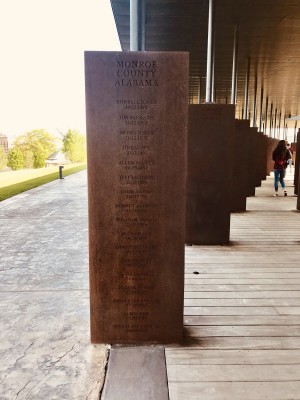 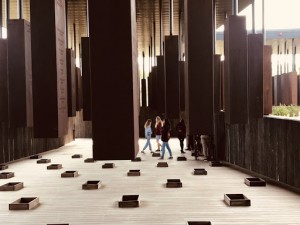 Students were stunned and pained to read that white crowds of 1000, 2000, 4000, 10,000 even, would come out and watch lynchings, including white parents who brought their children. This truth, that is so hard to understand, grabbed hold of our hearts that day. 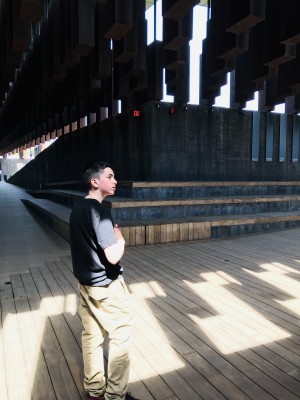 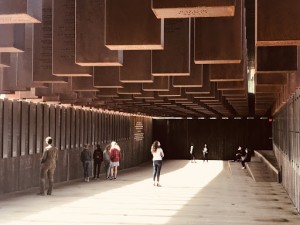 After reflecting on the incredibly moving morning, we visited Dexter Avenue Memorial Baptist Church, the only church where Rev. Dr. Martin Luther King, Jr. served as a pastor, starting at the age of 25. We met Ms. Wanda who reminded us that Dr. King asked not to be remembered for the awards he was given but because, “I tried to help someone; I tried to love others.”

Towards the end of our trip, we headed to Tuskegee. At the Tuskegee Airfield, we learned about all of the people who contributed to the work of the African American military pilots who fought in World War II, breaking down barriers and expectations - whether they worked in the dining hall, as a mechanic, or flew the planes, all the men and women were considered “Tuskegee airmen.” 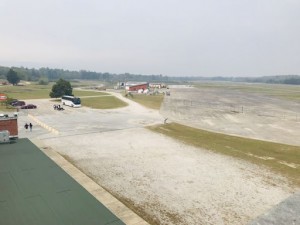 We then visited Tuskegee University, one of the nation’s oldest HBCs (historical black colleges), ending our campus tour in The Legacy Museum, which is housed in the old hospital that cared for children with polio. We learned more about the Tuskegee experiment and how treatment was denied to black men diagnosed with syphilis even when penicillin was already available. We learned more about the HeLa cells of Henrietta Lacks, and how she still is present today through her distinct cells and had an important discussion about the role of informed consent in the medical field. 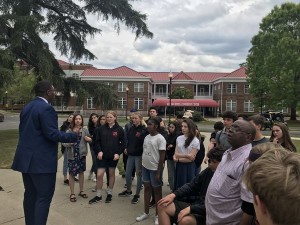 This trip was to face our country’s past - this is our history. This trip was not easy, nor should it have been; for nothing we are trying to learn about comes without struggle. What a great gift to travel together and take in both such horrifying actions by people in the past and also drink in the inspiration and courage. This was an incredible learning opportunity for our 8th Graders - and their chaperones - and one that we’ll remember forever.